Maurice Haccuria was a Belgian artist, born in Jeuk in 1919 and died in Leuven in 1991. He was a painter, engraver and sculptor. He was self-taught, painting mainly animistic landscapes from 1943. By incorporating expressionism and cubism in his works, we notice a lyrical abstraction from 1960 that was closely related to action painting and Cobra design. He worked in monochrome for a short time, but at the end of the sixties we get a colorful palette again. He was a teacher at the academy in Aarschot.
From the press: “The work of M.H. is at the same time on the one hand dissecting, unraveling, reducing nature to a few elementary graphic components, and on the other intuitive, guessing at the meaning of life and nature, of man and his way of existence.” He started sculpting in 1959. He initially worked with slate and metal and from 1976 also with marble. About his sculpture: “He succeeds in freeing a structure from the cumbersome mass that stands out for its calm elegance. In his compositions, the intellect appears to win over the imagination, although the feeling is seldom absent. Between 1957 and 1985, he received several prizes and distinctions, including the 'Young Belgian Painting' prize (1957 and 1958), the Talens Prize for Belgium (1959), Swiss Prize for Abstract Painting (Lausanne, 1961), Europe Prize for Painting (1962), a silver medal at the International Competition in Seoul (1985) and the Bronze medal at the International Prize of Rho-Milano (1985). He took part in various group exhibitions in the interior, including in Brussels, Hasselt and Bonheiden. Abroad he exhibited in Paris and Tours in France, in Klodzko/Poland and in Milan/Italy. Works by this artist can be found in the Print Room in Brussels, in the Middelheim in Antwerp, Museums of Skopje/Yugoslavia, Museums in Macerata/Italy. Mentioned in Two centuries of signatures of Belgian artists and in BAS II.
(Piron, B.T.)
Result:1 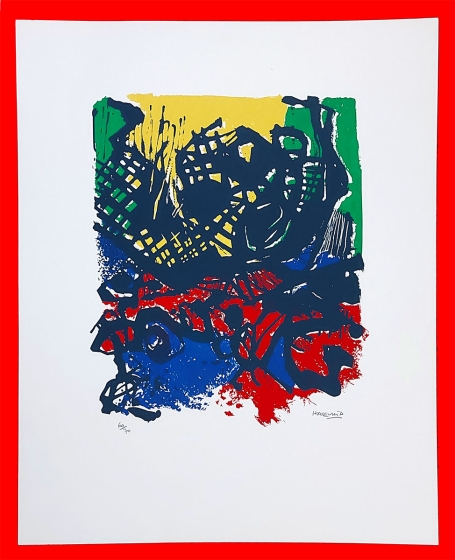 Haccuria Maurice
€68,00
Result:1
This item has been added to your shopping cart: