Valentijn de Waele was a Belgian artist born in Hamme in 1918 and died in Wilrijk in 2000. He was a painter. Realized river views with sloops and landscapes, figures (clowns). Exhibited with Les Arts en Europe in Brussels in 1966 and 1967. His estate was auctioned at the Zaal Jordaens in Mortsel in 2008. Mentioned in BAS II and Two centuries of signatures of Belgian artists. Source: Piron


Valentijn de Waele was born on May 18, 1918 in Hamme, where, dixit Filip de Pillecyn, also a son of Hamme, "smelled of poverty and of tar from the rope-makers." Maurits Tilley (1908-1978) from Hammen was his first teacher. Later Jules van Ael, Jan Wouters and Carlo De Roover contributed to his artistic development at the Royal Academy of Fine Arts. As a people allied from Hammen, Valentijn de Waele always had genuine compassion for small people and poor country people. If the theme of his region occurs repeatedly in his work (in particular the moor heath), he has only seldom explicitly portrayed man himself. However, he understands the art of man and to refer the human tragedy through low and forgotten houses, typical farms, silent facades and introverted structures. His houses are charged with a melancholic atmosphere, but at the same time painted with a sensitive attention and a plastic touch. He highlights picturesque elements in the somewhat sad picture. He has an eye for the miserable and decay, for the pictorial charm of a hovel, Flanders. Volume 27, a sheep shed, a rear facade and an abbey ruin, for the complete desolation of a cemetery. The viewer feels the presence of the dark mystery of life. Valentijn de Waele is also attracted by the beauty of forest and heathland, green vegetation and rural oases. He knows how to express his compassion for nature in a rhythmic cadence and with a sober palette to interpret in compositions that avoid superfluous details and that suggest unrest among the immobile. He fathoms and interprets in a sensitive way the soul of his native region and of the Antwerp Kempen. The works of Valentijn de Waele bear witness to a deepened sense of color. They are often kept in a discreet gamut of muted colors, suggestive of the gray or melancholic mood. From colors such as green, gray and reddish brown, De Waele draws the warm-spirited expression that most adequately corresponds with his inspired, humble nature. However, his work is never skimpy in color. Valentijn de Waele does not rely on either -isms or any other artistic Volapuk. He paints honestly, true to his own vision and the hereditary lure voice, permanently stigmatized by "poor Flanders" and above all experienced. (Aug. van Daelstraat 49, 2610 Wilrijk) René Turkry (Source: Flanders. Volume 27. Christian Flemish artists' union, Roeselare 1978)
Result:1 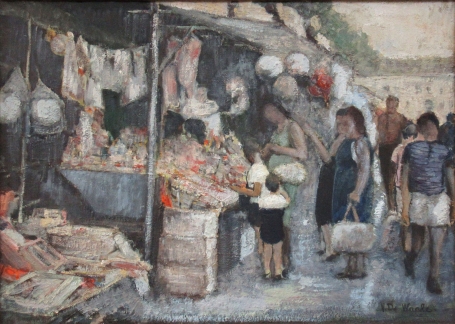 de Waele Valentijn
€185,00
Result:1
This item has been added to your shopping cart: